[2019-06-13] We are happy to announce a new distributor has been authorised for the region of Commonwealth of Australia. An agreement with SouthernLaunch has been signed in May 2019.

Astos Solutions agreed to give SouthernLaunch exclusive rights to sell products to companies working on rocket launch in Australia.

We look forward to a great long-term relationship with Lloyd Damp, CEO of SouthernLaunch and his team! Good luck with the business in Down Under!

[2019-05-20] We are proud to be a Sponsor of this year's Australian Universities Rocket Competition AURC for the first time. All University teams have been granted academic licenses of ASTOS and ASTOS Amateur Rocket Edition for the preparation for the competition. The final competition has taken place alongside the rocketry festival Thunda Down Under 2019 17 - 19 April 2019.

We express our congratulations to all teams who have taken up this challenge and are especially happy with this year's winners of the AURC!

See this LinkedIn post for more links and pictures.

Gladly again in the coming year!

[2019-05-20] Since our last news update several months ago ASTOS has evolved from version 9.3 to 9.7 while new features have been added and existing ones have been improved:

The new major release 9 of the analysis, simulation and trajectory optimization software for space applications ASTOS is now available for download.

Release 9.0.0 of ASTOS represents a milestone in the long history of this product. It supports now system concept analysis and comprises complete mission analysis capabilities required for e.g. Earth observation missions, as well as launch and reentry safety analyses.

In contrast to its previous releases, ASTOS 9 is solely 64-bit application and is therefore prepared for large and complex scenarios and computations.

Its Simulink® interface and its detailed models for sensors and actuators that comprise flexible error modelling capabilities let this ASTOS version be prepared for MIL, PIL and even HIL applications. Latter is possible due to a cooperation with dSPACE® and the support of their their SCALEXIO® real-time processing platform including a wide range of interface cards.

Of course, also the latest release of ASTOS is an ideal tool for trajectory optimization and multi-disciplinary vehicle design.

After focusing on Mars for years, the scientific community has re-discovered the Moon as study subject.

The 11th annual Intercollegiate Rocket Engineering Competition (IREC) has been held in June 2016 in Green River, Utah. 52 teams presented their rockets and the Amateur Rocket Edition of the ASTOS software has been used by seven of them! Great results for a German software in consideration that all the teams were coming from the American continent.

One of the teams using ASTOS is the UVic Rocketry team at the University of Victoria. They won the Team Sportsmanship award and received an honourable mention in the Space Dynamics Laboratory Payload Challenge. The Rocketry team achieved third place in the Basic category (10000 feet). This summer they will attend the 12th edition, but in the advanced category: aiming at 30000 feet.

Astos Solutions has signed a contract with the DLR space agency to perform a phase 0 study about the design of a nano-launcher. The aim of the study is to identify the most cost-effective system that shall place a nano-satellite in a Sun-synchronous orbit.

The project focuses on the New Space approach implementing a new launch system. After an overview of the existing technologies available on the market, a launch vehicle design will be performed with the ASTOS software to determine the most cost-efficient launch system. Several technologies and possibilities will be evaluated: air-launch, rail, balloon, launch pad, solid propulsion, hybrid propulsion, liquid propulsion, alternative avionic system, etc.

The activity is in line with the extended application of ASTOS for trajectory optimization, vehicle design and GNC design to the full range of launchers: from heavy-lift Ariane 6 to small amateur rockets.

The project has been commissioned by the DLR with funds from the Federal Ministry of Economics and Technology (BMWi) according to a decision of the German Federal Parliament (No. 50RL1601).

ESA signed a technology development contract with Astos Solutions for further development of the multi-body and flexible-body modelling of launch vehicles. The objective is to investigate sources acting on the flexible body of a rocket and to use DCAP and ASTOS for the modelling of the subsystems and flexible dynamics. The focus will be put on analysis of the propulsion subsystem which contributes with oscillating pressure and other effects. Moreover separation process, distributed aerodynamics and propellant sloshing will be investigated. Finally a workflow will be established, which allows the extraction of the structural elastic characteristics.

The activity is embedded in the current efforts expanding ASTOS by a multi-body dynamics feature which will allow the analysis of space missions with manipulator arms and flexible structures in early design phases.

Astos Solutions was awarded a contract by OHB System to develop the AOCS SCOE for the SARah radar satellite reconnaissance system of the German Federal Office of Equipment, Information Technology and In-Service Support of the Bundeswehr (BAAINBw). Astos Solutions will be responsible for implementing and qualifying the SCOE (Special Check-Out Equipment) for the AOCS (Attitude and Orbit Control System) subsystem.

The verification of avionics and especially of the AOCS subsystem is a fundamental activity in the flight segment of any space system. The speciality of the SCOE is, that it will be based on off-the-shelf components such as the ASTOS software as SCOE simulator and dSPACE hardware and software for the SCOE controller. The development for two AOCS SCOE will be only 10 month.

DECAN, FAUST and HEROS Launched. Astos Solutions was there!

The first launch campaign of STERN took place on 22 October 2015 in Esrange (Sweden).

The FAUST rocket from TU Braunschweig performed an almost nominal flight and reached an altitude of almost 6000 meter. More information can be found on the group web-site www.er-ig.de/cms/

The HEROS rocket from the University of Stuttgart performed a nominal start, but than the flight was not nominal. The team is working to solve the problem and they plan to perform a second test in 2016. www.hybrid-triebwerk.de

The DECAN rocket from TU Berlin started the 27 October 2015, nominal flight with maximum altitude of 5500 meter.

For all teams the high-fidelity 6DoF simulations are performed with the ASTOS software. ASTOS is also used to compute contingency scenarios. More information on STERN can be found on www.dlr.de/dlr/desktopdefault.aspx/tabid-10081/151_read-15572/#/gallery/21018 and on the DLR STERN project page.

[2015-10-24] LOTOS 2 is an advanced tool for trajectory optimization of electric orbit-raising scenarios and hybrid transfers.

Astos Solutions participates in a multi-instrument airborne campaign to monitor the shallow re-entry of ESA's 5th, and final, Automated Transfer Vehicle over the south Pacific ocean. The goal of this mission is to better understand the physics of the end of life International Space Station de-orbit and the physics of shallow uncontrolled re-entries.

A team from Astos Solutions is currently preparing their instrument on board the NASA DC-8 scientific aircraft in Palmdale, California. The instrument, called CEFIR, is designed to observe the main re-entry object, focusing at fragmentation and explosion events. For the latter the number of created fragments and their induced velocities are of major interest.

More information on CEFIR can be found here. 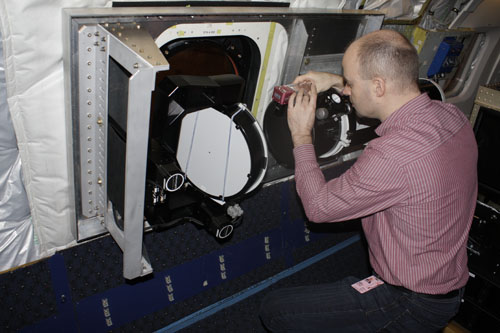 The 22nd June 2012, after a nominal countdown, SHEFEX II has been launched from Andoya (Norway).
Clear sky and wind close to nothing provided the finest launch conditions one can desire. Operations went smooth, telemetry was excellent, GPS, RADAR and IMU data were provided with very good conformance between the sources. 1st stage ascent was flatter than expected, therefore the 2nd stage pointing was corrected accordingly. The ACS worked quick and precise, green for 2nd stage ignition was given at +138s. 2nd stage burn was close to nominal and we hit bullseye with an impact roughly 10km north of Nominal Aiming Point (ground range being 800km!). Experimenters were largely happy. Payload could be detected by airplane, but due to bad visibility not yet pinned on the map. Currently recovery ship is searching with airborne assist and even TerraSAR-X satellite search assist. The hope is to get it back, but chances of course diminish with time. During the design of the mission ASTOS has been used to optimize the trajectory, but most important an extensive Montecarlo analysis has been processed to determine the impact dispersion of the rocket. The re-pointing algorithm, design by MORABA in collaboration with Astos Solution has been integrated into ASTOS to compensate for first stage errors. This was exactly the case of SHEFEX II.

More information on this topic can be found on the DLR web site.
A paper about the re-pointing algorithm has been accepted by printing from the AIAA "Journal of Spacecraft and Rockets".